World Orthopaedic: How it all started 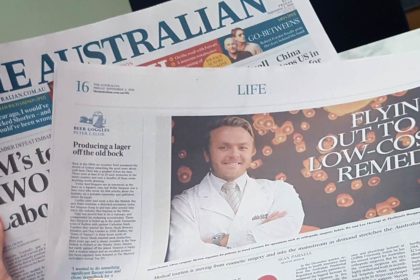 In the last 20 years, the world of healthcare has changed a lot.

Especially since the year 2010, a time when medical travel was almost unheard of in Australia – literally a foreign concept.

A medical researcher back then, I was investigating treatments for age-related diseases at Griffith University.

Within the next few years I would fast become a widely published scientific author in the area of age-related bone disease.

But had you asked me how to balance a cheque-book or start a multi-national medical travel company – I had no idea.

In my early years of research, I found myself reading more and more pieces of literature referring to the “medical traveller“.

A young and rather naive early-career academic with only a couple of international trips under my belt, I couldn’t really wrap my head around the concept.

“You want to have your orthopaedic surgery overseas? Are you crazy?” – Me, circa 2010

That was until fate eventually called me to visit these hospitals overseas during my trips to present talks at medical conferences.

It was during these conferences that I met incredible surgeons in places like Bangkok and Dubai, and even experienced their healthcare first-hand.

Blown away by the efficiency and proficiency of the healthcare teams I started to dig deeper and compare their systems and statistics to those back in Australia.

I was already thoroughly aware of the issues back home, where Australians were waiting up to 3-5 years for knee and hip replacement surgery.

And the next logical step was examining the huge costs of private orthopaedic surgery faced by our Australian seniors and too-young-to-retirees.

Was orthopaedic surgery overseas a solution to bulging waiting lists and exorbitant surgery prices in Australia?

Although a few states in Australia have subsidised “intermediate” lists for private surgeons to be paid by public tax-dollars, the fix is far from absolute.

Years after intermediate lists were first promised, we still today receive call after call from patients whose doctors have “ran out of intermediate places”.

And many states still haven’t even implemented the proposed system at all.

In short, the public waiting lists continued and still continue to grow. And back in 2010, no-one was willing to acknowledge the quality of surgery available overseas.

Had I been a surgeon myself, perhaps I too would have feared the implications of countless patients leaving the country for their surgery.

But I’m not that kind of doctor, I’m a medical researcher. I only care about finding solutions to the problems faced by patients in healthcare.

And so I, a team of fantastic doctors, surgeons and business-suited “cheque-book balancers” got to work to make this potential solution a reality.

Less than 5 years and hundreds of happy Australian patients later, The Australian newspaper was celebrating the services of our team with the nation, under our previous name SkyGen Orthopaedic.

Were we the first though? Nope.

Just like in the 1990s, a time when many were afraid of booking airfares online or giving credit card details to a computer, so too did many once fear embracing medical travel. But there’s no doubt that medical travel is one of the greatest revolutions of the 21st century. Its systematic benefits now only limited by how many patients are aware of it.

Sure, we like to think of ourselves as innovative at World Orthopaedic. But travelling for surgery has not only been embraced by many countries before – some healthcare systems have relied on it entirely for decades.

In many place like the UK and Australia, Medical Travel is a relatively new concept which saves patients time and money. Travelling interstate and internationally for private healthcare can save patients tens of thousands of dollars. And as a result of our bulging waiting lists, perhaps the greatest appeal of surgery overseas to Australians is in skipping the public waiting lists back home.

However, elsewhere in the USA, the UAE and China, many large corporations have been outsourcing their employees’ health insurance to other countries for years. I.e. If your job in Dubai comes with health insurance, chances are you’ll be looking overseas for your pacemaker or knee replacement. These are also the sorts of places where a local X-ray can cost you thousands of dollars and any kind of surgery calls for family discussions about a second mortgage.

Thankfully in Australia a lot of our healthcare is affordable, but areas like orthopaedics are rapidly sliding in the direction of the USA all too quickly.

Australia is one of the many worldwide populations with a rapidly ageing population and pressurised public healthcare system. As an Australian, we’ve been led to believe that we have two options for our orthopaedic healthcare:

Once you look a little further into your options as an orthopaedic patient, there are actually as many as 4 (even 5) options:

*I.e. when your condition has begun to affect your income, day-to-day productivity, physical or mental health.

And of course, patients can also pay for private surgery in Australia without health insurance – which ranges from $24,000 (knee replacement) to $37,000 (hip replacement).

Although, if you can afford to do that without a worry in the world, you’re probably also worldly enough to appreciate the added appeal of the quality of surgeons overseas as well.

But, as it turns out, there are a lot of people who can’t afford full fee-paying private surgery.

Number of Medical Travellers from Australia each year: 22,000 (ABS)

As waiting lists in Australia continue to stretch, and countless patients return from overseas having had fantastic experiences and outcomes, it’s clear that more Australians are choosing orthopaedic surgery overseas.

Knee, hip or shoulder surgery overseas may come with a holiday for yourself and your travel companion – but this bonus doesn’t even factor into the equation for most patients.

It’s about saving time and money (avoiding years of lost income plus halving the price of private surgery).

Not to mention the quality of care, the attitude and expertise of the surgeons and the cultural advantages of having surgery in a hospital where professionals love their job.

Most importantly, thanks to medical travel fewer and fewer Australians are left suffering between private surgery they can’t afford and public surgery lists they can’t wait for.

And as more people leave behind the public system in Australia, so too do the public waiting list pressures reduce.

So we’ll keep doing everything we can until every last patient is provided the orthopaedic healthcare they should be able to expect from this modern world, united by airports and people like us who love to help.

To learn more about World Orthopaedic, please visit our About Us page. To enquire about finding new, faster and better orthopaedic care, call 1300 759 436. Note: None of the content on this website is to be interpreted as medical advice, please read our terms & conditions.

This site uses Akismet to reduce spam. Learn how your comment data is processed.